Behind the dictionary: Researchers’ work crucial 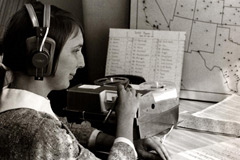 Along the way, the Dictionary of American Regional English has been an important source of employment and education for graduate students who have worked on the project, including those who traveled the U.S. in the late 1960s conducting the surveys that are the basis for the dictionary.

August Rubrecht was ready to start his dissertation in English when he was hired as a DARE field worker in August 1967. He spent the next year traveling through Arkansas, Louisiana, Tennessee and Delaware in one of DARE’s Word Wagons, campers that were specially outfitted with reel-to-reel recording devices and other tools field workers needed.

A year later, Sharon Huizenga began three years of fieldwork in Virginia and Kentucky, where her Michigan license plate drew attention. Huizenga says, “that caused some suspicion,” especially following the upheaval of the 1960s civil rights movement in the South.

Researchers were required to find informants who had lived in the designated community – usually one that had been long settled -- their whole lives, Rubrecht says. The project was also skewed toward older informants, who had seen such changes as airplanes, radio, indoor plumbing and electricity in their lifetimes.

“We were catching the present, but one reason we tried to get older informants was they were able to give us what they knew from the old days and the latest with their grandchildren,” Rubrecht says.

Huizenga, who asked “Where do I sign up?” when told more DARE research might be done, says she’s interested in knowing how many of the regional terms in the dictionary have gone out of use or been replaced by new ones.

“Language reveals so much about who we are and what our values are,” Huizenga says. “You could say DARE is a portrait of America at a particular time, and that portrait will help us remember where the present comes from.”

What is a Maine-born doctor to do when a patient in Pennsylvania complains, “I’ve been riftin’ and I’ve got jags in my leaders?”

Consult the Dictionary of American Regional English to learn that the patient has been belching and experiencing sharp pains in his neck. After nearly five decades of work at the University of Wisconsin-Madison, the fifth volume of the dictionary, covering Sl to Z, is now available from Harvard University Press.

The completion of the dictionary, known as DARE, is a landmark of American scholarship, recording the words, phrases, pronunciations, and pieces of grammar and syntax that vary from one part of the country to another.

DARE is based on interviews researchers from UW-Madison conducted in more than 1,000 communities across the country between 1965 and 1970. After the fieldwork was done, editors in Madison spent four decades studying the more than 2.3 million responses the fieldworkers had collected, capturing in DARE the diversity and richness of the American language, from Adam’s housecat (an expression, “he wouldn’t know me from Adam’s housecat”) to zydeco (a kind of dance music associated with Louisiana Creole culture).

DARE has evolved into a valuable resource for physicians, lawyers, police and scientists, as well as the writers, librarians, teachers and linguists who were expected to use it. They find answers to questions raised by their professions, but they are also drawn to such colorful words as “snollygoster” (a shameless, unscrupulous person, especially a politician) and “willywags” (a remote, sparsely inhabited area).

The project also has a trove of more than 1,800 audio recordings field workers made as they did their research, and actors and dialect coaches looking to capture a certain regional style have used them over the years.

Cassidy had originally hoped the dictionary would be done by 1976 in time for the nation’s bicentennial celebration, but the first volume wasn’t finished until 1985. He continued to work on the dictionary until his death. Even after his passing, Cassidy continued to push it forward: His epitaph reads “On to Z!”

With five volumes covering the full alphabet now complete, DARE writers are finishing a sixth volume of supplementary materials, including sets of maps showing how synonyms are distributed across different areas of the country. At a glance, readers will be able to see where Americans use different words to describe the same objects.

An electronic edition will be released next year, and Hall says the dictionary may eventually do follow-up research in the communities that were part of the original survey. 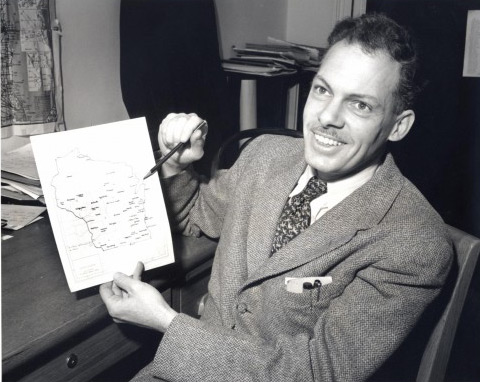 DARE founder Fred Cassidy in 1949 as he was developing the Wisconsin English Language Survey, which was a pilot project for DARE. (Courtesy: UW-Madison Archives)

The dictionary was conceived in 1962, when the American Dialect Society asked Cassidy, a UW-Madison English professor, to create a dictionary of dialects of American English.

Cassidy had already conducted a smaller study of regional differences within Wisconsin speech, but beefed up the survey to more than 1,600 questions for DARE.  Graduate students from the UW and many other universities fanned out across the country between 1965 and 1970, sometimes spending days talking with local residents about their words for everything from sandwiches (a dagwood in Iowa and grinder in Connecticut) to the lint under furniture (a dust bunny in much of the country but a dust dolly in New Jersey).

Contributions from university donors, as well as the National Endowment for the Humanities, the National Science Foundation, private foundations and individuals have sustained DARE over the last half-century.

Once the alphabet was started, “how could you not do the whole thing?” asks Susan C. Cook, associate dean for the arts and humanities in the Graduate School at UW-Madison. “DARE has provided a critically important learning opportunity for us as we’ve seen the project take shape over time.”

Although the project took decades longer than expected, Hall says Cassidy would be “delighted” to see the fifth volume published, but at the same time recognize there was still work to do.

“He would adopt our mantra, which is ‘On beyond zebra!’” Hall says.

For more information, examples of regional terms, quizzes, photos, audio and other resources, visit dare.news.wisc.edu or DARE’s website at dare.wisc.edu.

The dictionary can be purchased at bookstores or ordered from Harvard University Press.

DARE in the media